Like the Battle of Hastings on the 14th October 1066, the 11th November 1918 is a date which is etched into our national consciousness. Anyone with even the most basic knowledge of British or European history knows that at the eleventh hour on the eleventh day of the eleventh month in 1918, the fighting on the Western Front – the long and winding snake of trenches which stretched for about 450 miles from the Channel ports in the north and ran all the way through Belgium and France to the border with Switzerland in the south – came to an abrupt end. 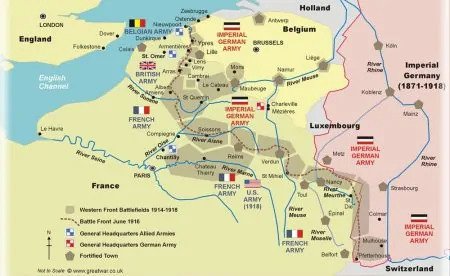 Or at least it should have done. At about 5.15am on the morning of the 11th November 1918 Marshal Ferdinand Foch, the Allied Commander in Chief, and four representatives of the utterly defeated German government signed an armistice in Foch’s staff train in the forest of Compiègne, north of Paris. The armistice declared, among other things, a “Cessation of hostilities…six hours after the signing of the armistice.” In other words the fighting on the Western Front between the Allies and the Germans was to end by or before 11am that morning. 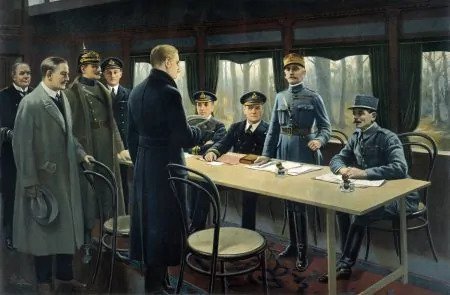 The signing of the Armistice of Compiègne at about 5.15am on the 11thNovember 1918

If the first casualty of war is truth, the last casualty of war in 1918 was communication. Along the Western Front the fighting continued right up until 11am – and in some places even after hostilities should have ended. In most cases this was because news of the ceasefire had not yet reached the commanders of some units in the front line. In other places the reason was more vindictive. Mindful of years of bitter fighting and mass casualties on both sides, many Allied artillery units continued to shell German positions after 11am. The gunners knew that firing their surplus shells would save them a job disposing of any unspent ammunition when their batteries were next ordered to move. 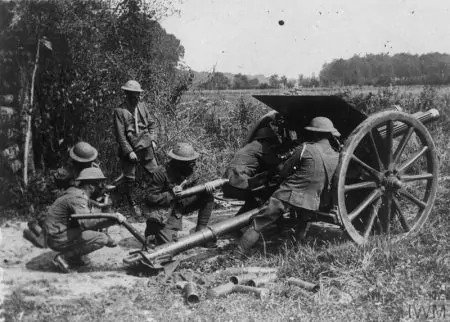 A British 18 pounder field gun and its crew in action near Saint-Léger-aux-Bois in France in August 1916. Note the gunners are wearing box respirators

But in most places the ceasefire was willingly observed. One British soldier prosaically described the scene he witnessed in his section of the front line, writing that at 11am: “…the Germans came from their trenches, bowed to us and then went away. That was it. There was nothing with which we could celebrate, except cookies.” It must have been a surreal end to over four years of total war in which nearly 20 million people had died as a direct result of the fighting. Tragically, it is estimated there were 10,944 casualties on the last day of the First World War, of whom 2,738 were killed.

The last British soldier killed in the First World War is thought to have been Private George Edwin Ellison of the 5th Royal Irish Lancers who was killed at about 9.30am on the morning of the 11th November near Mons in Belgium. Private Ellison was certainly unlucky. But perhaps not as unlucky as Private Henry Gunther, an America soldier who was killed at 10.59 am – only 60 seconds before the official end of hostilities.

Not all casualties of the war had missing limbs

The ‘last’ person killed is something of a misnomer, as I tell my pupils, as thousands of soldiers died of their wounds in the days, weeks, months and even years after the fighting had ended. Who’s to say that the ex-servicemen who died of Spanish flu during the deadly influenza pandemic of 1918-1920 because their lungs has been severely weakened by poison gas, or those who committed suicide in the 1920s because of the severe mental health problems (neurasthenia or shell shock then, PTSD now) they’d developed from taking part in industrial warfare, are any less the victims of this appalling conflict than the men whose bodies lie in the immaculately-kept Commonwealth War Grave Commission cemeteries in Picardy or Palestine? 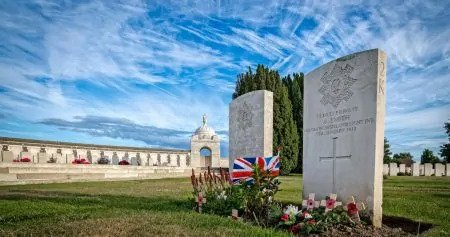 The First World War inside and outside of the classroom

I’ve been fascinated by the First World War for as long as I’ve known about it. And now as a History teacher I have the privilege of teaching this mammoth conflict to a new generation of fascinated children. In my experience the two world wars of the twentieth century, along with the Titanic, are the topics Key Stage 3 pupils enjoy studying the most.

One of my professional interests as a teacher is learning outside of the classroom. History as a discreet subject lends itself particularly well to this. Last month I took some of my Year 10 and Year 11 pupils on a battlefields tour in and around Ypres in Belgium. Ypres holds a very special place in the story of Britain’s involvement in the First World War. Hundreds of thousands of British and Empire soldiers died fighting within a few miles from this picturesque medieval town, in the so-called Ypres Salient. Many more of them were wounded. Defending Belgium’s neutrality from an invading German army was of course one of the main reasons why Britain and its enormous Empire got involved in the conflict in the first place.

The gate stands on the eastern side of the town on the Menin Road, the route along which so many British and Allied soldiers marched from the town towards the front line. About one in ten of them were marching to their deaths. As I stood there with my pupils on a typically cold October evening and listened to the sound of the bugles, I read the following words on the memorial:

As if being killed in your teens or early twenties wasn’t bad enough, I find the fact that so many of these young men have no known grave incredibly sad. There was no grave for a grief-stricken mother or wife or child to visit. I’m not a man given to hyperbole but reading those words that night sent a cold shiver down my spine. I think my pupils, the majority of whom had never visited a battlefield before, were equally moved. 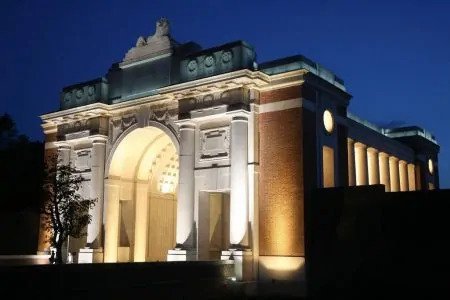 The Menin Gate Memorial to the Missing in Ypres in Belgium

Of the thousands of poems written during and after the First World War, I find Siegfried Sassoon’s On Passing the New Menin Gate, by far the most haunting.  The poem does not beat about the bush. It begins:

Who will remember, passing through this Gate,
the unheroic dead who fed the guns?
Who shall absolve the foulness of their fate,
Those doomed, conscripted, unvictorious ones?

Well might the Dead who struggled in the slime
Rise and deride this sepulchre of crime.

For me, this poem more than any other captures the overwhelming sense of anger and bitterness caused by the war. 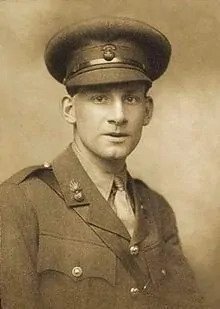 The importance of commemoration

I teach the First World War every year but I’ve felt a heightened sense of poignancy teaching it in this centenary year. There are hundreds of very good teaching and learning resources on the First World War for pupils of all ages and abilities out there – I’ve created a few of them myself. But none of them allows pupils to access the past in the same way as learning about trench warfare while standing in a German support trench at Croonaert Wood or learning about how wounded soldiers were treated at casualty clearing stations while visiting Essex Farm Cemetery, where the Canadian army doctor Lieutenant Colonel John McCrae wrote perhaps the most famous poem of the war, In Flanders Fields.

Whatever type of school you teach at, please do something meaningful this November to mark the centenary of the end of this tragic war, even if it’s nothing more than a short assembly. We owe it to the men and the families of the men who never marched back along the Menin Road into Ypres. 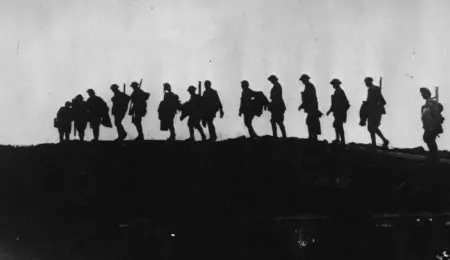