Diminutive Annabel Gracey may look like your average 12-year-old, but at night on London’s West End she’s transformed into a rock ‘n’ roll star as she makes history in one of theatre world’s most famous shows.

The Bradford youngster is breaking boundaries for musicians playing a role usually reserved for a boy in West End musical School of Rock, based on the hit 2003 movie featuring Jack Black.

But her skills on the drums impressed audition judges so much, show composer Andrew Lloyd Webber changed the part of the drummer, Freddy, just to include the Woodhouse Grove School Year 8.

It’s a dream come true for Annabel, who had hoped to join the cast ever since she watched them on TV.

“I once saw the School of Rock perform on the X Factor and thought how much I wanted to be in it,” she says.

She found out about an audition through a friend, and decided to try her luck. “When I found out I had been offered the role of Freddy I couldn’t believe it, especially as this has always been played by a boy. I was so excited, happy and amazed.” 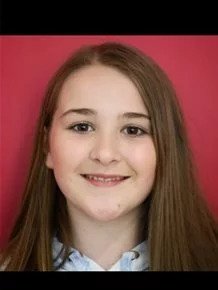 Annabel has been taking drumming lessons since she was eight and parents Sarah and Jonathan insist her success is just reward for her years of practise.

“We are extremely proud of Annabel. She worked so hard throughout the audition process and it’s lovely seeing her dedication pay off,” mum Sarah says.

“We still can’t quite believe she landed this role and have to pinch ourselves from time to time.

“Despite knowing from the beginning of the audition process the challenge that lay ahead, her talent and enthusiasm shone and we are so pleased this was recognised.”

The stage musical revolves around struggling rock musician Dewey Finn, who poses as a substitute teacher at a prep school and forms a band with the music class to try to win a lucrative Battle of the Bands competition.

Annabel is one of three teams of children who take turns playing the rock-star pupils and is now splitting her time between London and Bradford, staying in the capital in performance weeks, but coming home during time off.

“We do miss her but make contact many times throughout the day and evening,” mum Sarah adds.

“She has made many new friends which is lovely and seeing her enjoying herself and doing what she loves makes it easier for us.”

THE LAST KING OF AMERICA

GR8 APPS FOR THE ART ROOM