What should students focus on to maximise their marks on AQA GCSE English Language Paper 2? Andrew Atherton offers his strategies for high-performance on this tricky paper…

As we move towards GCSE examinations, there will be countless students (and teachers!) across the country looking at English Language Paper 2 and scratching their heads. ‘So, let me get this straight’, they might be saying, ‘Q2 asks me to write a summary, but what it really wants is inference?!’

At the best of times, English Language is a complex examination, and not necessarily because of the content it assesses. But, Paper 2 is especially difficult, and again not because of its content. In order, as much as is possible, to alleviate some of these difficulties this article offers a step-by-step overview of how to approach each question on AQA English Language Paper 2.

One quick caveat before we get started, though: this article is written from the assumption it will be most useful for those teaching Y11 as students make their final preparations for the upcoming examination. The below advice is very much targeted to the exam and strategies to help navigate its specific questions.

As such, it doesn’t address or dwell on general approaches for reading and enjoying non-fiction. Whilst this is crucial, and hopefully students would have been fed a rich diet of varied non-fiction already, this article assumes these foundations have already, as much as possible, been built.

Let’s begin then with Question 2: a question that expects our students to infer that it isn’t actually a summary they need to write, but instead inference. However, once we know this, the question doesn’t need to pose us, or our students, too many problems.

My top strategy for approaching this question is to use the below structure table: 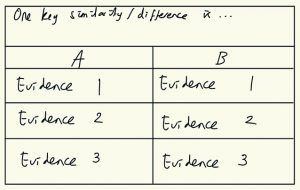 The idea here is for students to quickly extract relevant information from the two sources and place it in the table: an overall point of difference and evidence from each source that would substantiate this difference. They now have everything they need to answer this question.

Here’s how to use the table: the top row simply becomes the opening sentence of the response. We then look at the column for Source A and work our way down, jumping from one piece of evidence to the next. As we do so, we build in points of inference using phrases such as ‘…, which might infer’ or ‘…from which we might conclude’.

It is also possible to bundle columns so that two points of evidence are effectively referenced simultaneously, with a point of inference relating to both. We then signpost similarity or difference (In direct contrast to Source A…) and work our way through the second column, again including inference as we move through each piece of evidence.

The benefit to this table is that it offers a structure not only to our writing, but our thinking too, restricting the amount of evidence we can use, prompting us to select carefully. Displaying all the information in one glanceable table also helps students to better make connections and to spot patterns of difference or similarity.

The 10 seconds it takes to draw the table and the extra couple of minutes to extract the relevant information is, to my mind, well worth it for the added concision and quality of inference this support helps to produce.

However, if students feel drawing and compiling the table will take too long in a question that is admittedly already tight on time, they can of course circle the relevant evidence directly onto the Source and write their response from that.

I still very much recommend rehearsing and modelling this table, though, because even if students decide not to actually draw it in the exam, I’ve still found it significantly helps with how to think about and better understand what this question is expecting from us.

With enough practice, whether or not they physically draw the table, its shape will remain imprinted on students as a way to structure their response as they write.

I’ve found that students tend to be on pretty firm ground for this question, given it is effectively the same as Paper 1, Question 2 and indeed similar in skill to more or less any language analysis they would do across their English GCSE.

As such, I approach this question much as I do with Paper 1: students select 3 or 4 images from the relevant extract that strike them as especially rich. These are images they should be able to say multiple things about, and, if rehearsed often enough, it tends to be reasonably easy to identify those images in the passage that are suitably fertile. Once they have highlighted or underlined three or four images, they can start to write the response itself.

I tend to suggest students begin with a ‘big picture’ idea that they express in the first one or two sentences of their response: ‘When considering how the writer uses language to describe the landscape it is immediately obvious it is hostile and dangerous’. This helps to co-ordinate the rest of the analysis, ensuring the students begin their response with an overall argument about how the writer is using language to achieve a specific effect.

Students can then select the first image to discuss, making sure it elucidates or substantiates the big picture idea they have started with, which it should since the opening idea comes out of the three or four images they have already chosen.

I always recommend students begin with whatever image they consider to be most analytically interesting, the image about which they could say the most. This is because English Language as an examination very much succumbs to the law of diminishing returns: most of the marks students receive will come from the opening of their response and as their response continues they will find it harder and harder to squeeze further marks out of their answer. So, we want the opening of their response to be as good as possible.

This also helps because, as above, the Paper is very tight on time and it might well be students need to stop writing mid-sentence if they reach their imposed question time limit, which might feel galling, but is really crucial for the Paper as a whole. As such, we want the opening to be as good as possible so if they do finish mid-answer they have still been able to accumulate a significant number of marks.

Once they have finished analysing this first image, trying to notice several things about it, and considering the overall impact of the image as well as why specific words may have been used and how they connect to the big picture, they can then move onto the next image. And so on, repeating this same pattern 3 or 4 times.

For this question, I basically use the same table structure as Q2, but we deploy it in a different way. So, here is the table: 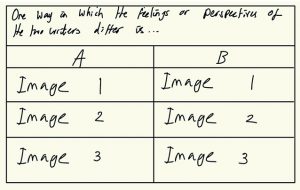 The top row is the same as in Q2 and is designed to identify an overall difference or similarity, but the content will differ as in this question there is typically a focus on perspectives or feelings.

Again, we then have three or four rows divided between a column for each source, A and B. Same structure, but different use. We extract from the sources images we might like to explore or analyse.

Rather than phrases such as ‘…from which we might conclude’ we use more traditional methods of analysis, for instance considering the overall feeling expressed by the given image and why this word and not another one.

As we move down the table, we use Janus-faced transitions to knit the argument together (The writer’s feeling that Y is further suggested by X…) and again include a clear shift to the second source (This is in direct contrast to…).

However, for this question, a variation on how to use this table might be to interleave the analysis. After we select relevant images from Source A and we are ready to look to Source B, we might try to match the two so each row offers a link, like the below.

Rather than moving according to column (all of A followed by all of B, with links back) students could move according to row (all of the first row, all of the second row, and so on). I don’t find this as effective, but it might be useful for this question where a focus on both writers at the same time can be helpful.

Given this question is worth 16 marks, the temptation is perhaps to attempt the above process twice. However, after lots of experimentation, I feel this is a mistake, although it is something I’ve done before.

As is always the case, depth trumps breadth. As such, I think it is much better to explore one overarching point of comparison and then really dwell on the imagery and methods being used by the writer to express their perspective and how this compares to the other source.

As we now know this question will ask students to write an article, we can be a little more targeted in our preparation. For this question, I teach students an overall response shape I call Describe, Position, Relevance, Now (or DPRN for short) and whilst this can be used with any form of writing, knowing this question will be an article based on the Advanced Information in helps us to work on how to mold this shape specifically to what students will be asked.

But, what is DPRN and how can students use it, both to write and plan? 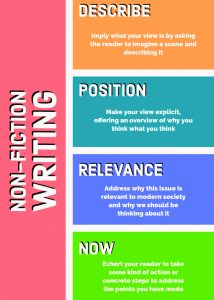 I’ve found this overall shape works brilliantly in helping to give student work an argumentative trajectory or impulse, given that it carries them from some kind of emotional outline to an overview of the issues to an explanation of its relevance and finally how we might address or solve the issue.

When planning, I encourage students to take a single side of A4 in their answer booklet and to divide it into quadrants. In each of the four spaces, students would generate ideas relevant to each element of DPRN. They might, for instance, consider what kind of scene or character to introduce in the descriptive hook and bullet point some ideas before then listing why they think what they think, and so on.

This means that when they come to write they can focus on constructing an authentic voice that is appropriate to the specific task rather than trying to generate ideas in the moment of writing itself. It also helps them to focus on constructing a cogent and linear argument that has a clear thread or perspective running through it, all crucial to success in this question.

And there we have it: an overview of top strategies to help maximise student success for AQA GCSE English Language Paper 2.

Andrew Atherton is a Teacher of English as well as Director of Research in a secondary school in Berkshire. He regularly publishes blogs about English and English teaching at ‘Codexterous’ and you can follow him on Twitter @__codexterous

What Should I Do When Promotion And Maternity Leave Collide?

How To Be A Happy Early Career Teacher