How I Would Teach… The Puzzle Of God

I have always enjoyed teaching the Puzzle of God. It’s a topic which appears briefly on the RS GCSE specification yet I dedicate more time to the topic because students love discussing the various philosophical and theological issues which arise from the traditional attributes of God. But how can we teach it effectively?

What is their knowledge of the Puzzle of God prior to the lesson?

For this lesson, I will be focusing on the puzzles relating to the Judeo-Christian concept of God. When planning this lesson, I start by considering what students would already know about the nature of God.

In Year 7, students would have explored the nature of God as shown through the stories in Genesis and Exodus. They would have been introduced to the traditional attributes of omnipotence, omnibenevolence and merciful. They will have looked at what is revealed about the nature of God and his relationship with humanity.

In Year 8, their understanding of God’s nature is built upon when they look at additional qualities such as Tawhid, the 99 names and the supremacy of God’s will. The relationship between God and humanity is further explored in their study of the New Testament, Jesus as the Incarnation and the guide for humans on what God expects.

In Year 9, students begin a more philosophical enquiry about the nature of God. Here, they study the traditional philosophical arguments for God’s existence such as the Design and Cosmological arguments. Their KS3 curriculum ends with a study of The Shoah and Jewish/Christian responses to the Shoah.

By the time students reach KS4, they have a rich understanding of the nature of God in the Abrahamic faiths, upon which we can begin a philosophical enquiry.

As this lesson forms an introduction to their KS4 RE, students may have some misconceptions about the nature of God or gaps in their understanding. These may include:

To deal with these misconceptions, I do the following:

How would I structure a lesson on the Puzzle of God?

I would begin the lesson by getting students to recall and map out what they already know of the nature of God. I’d start by asking questions such as ‘What qualities is God said to possess? and ‘What evidence do religious believers give to support their belief that God has these qualities?’.

As a result of class discussions, I would hope students would be able to recall qualities such as:

For these three qualities, I would introduce the meaning of the word ‘omni’ – latin for all – so that students are aware of the etymology of the words they are using.

At this point, I would say we are going to look at philosophical and theological puzzles which arise from these attributes. Usually, we start with omnibenevolence as this is often the most straightforward. I give students 30 seconds to talk to their partner about the question ‘What reasons are there to think God is not omnibenevolent?’. After paired discussion, we will share ideas as a class. Some potential problems raised by students may include the following:

With any problem posed by a student, I’ll ask probing questions such as ‘Why is this a problem?’ or ‘What evidence can be given to highlight this problem?’, to elicit a deeper, response from students.  At this point, I may introduce Plato’s Euthyphro dilemma to get students thinking about a fundamental problem with God’s omnibenevolence:

(i) God loves action X because it is good

(ii) Action is X is good because God loves it.

At this point, I say to students that we are now going to consider possible responses to these problems which we have mapped out.  Yet again, in pairs, they are given time to discuss the problems posed for God’s benevolence and to consider possible responses. This gives them the opportunity to recall knowledge acquired over their RE study in KS3. I’ll provide questions to frame the discussion such as ‘How might a religious believer defend their belief in God’s benevolence?’. I emphasise the use of the word might as I don’t want students to worry about providing definitive answers. I see this lesson as providing the space for setting out the puzzles and the web of theological and philosophical problems posed when thinking deeply about the nature of God’s existence.

After considering some possible responses, we move forward to follow the same process with the other qualities of God:

At the end of the lesson, a set of notes may look something like this: 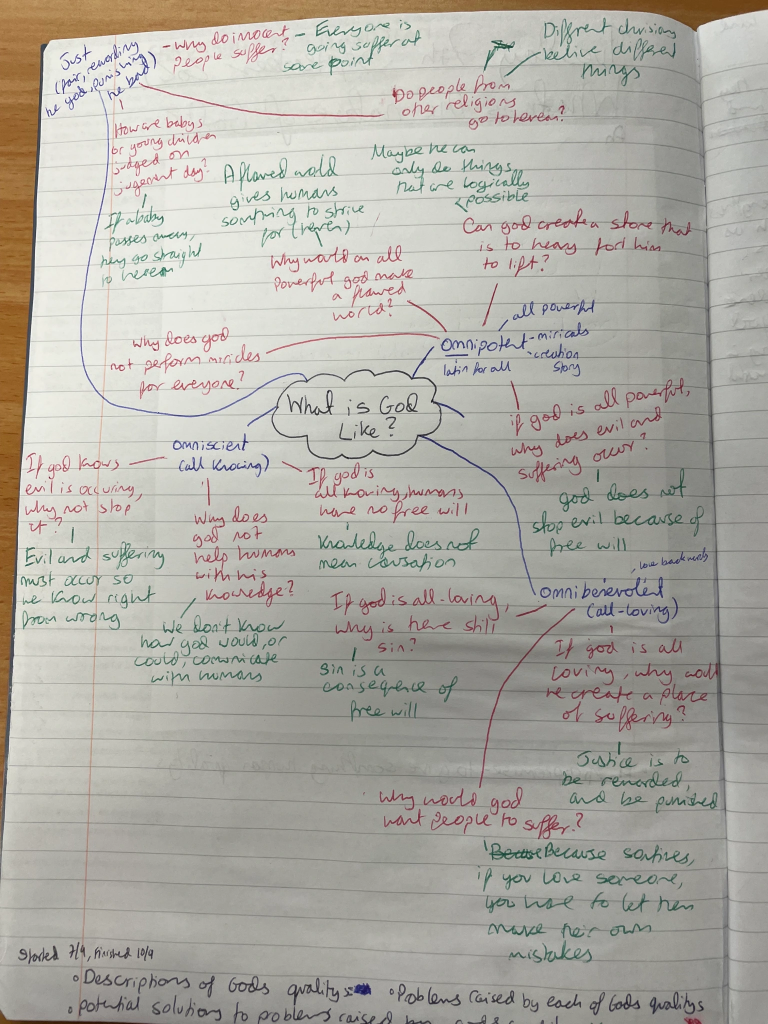 It’s not everything that has been discussed in the lesson and nor does it provide any definitive answers. Rather, we are setting the scene of the puzzle of God. In future lessons throughout KS4, we will look to unpack, solve and attempt to resolve these puzzles as students continue their study of what may be like.

Resources to supplement the teaching of the Puzzle of God

Traditionally, when teaching this lesson, I tend to rely on just a whiteboard pen. However, there are a host of other resources which can supplement the teaching of this topic.  This Crash Course Philosophy clip provides an excellent overview of the puzzle of God and gives some useful scenarios to get students thinking deeper about the nature of God.

Similarly, I use this clip to illustrate the Paradox of the Stone which is very useful for exploring the philosophical problems with God’s omnipotence.

Finally, based on an idea shared in Kate Jones’ Retrieval Practice, I may use a “Make the Link” resource. The reasoning behind using this particular resource is to get students thinking about how concepts or keywords regarding the nature of God link.  Students can make any connections they like but they need to be able to justify them with their own knowledge. 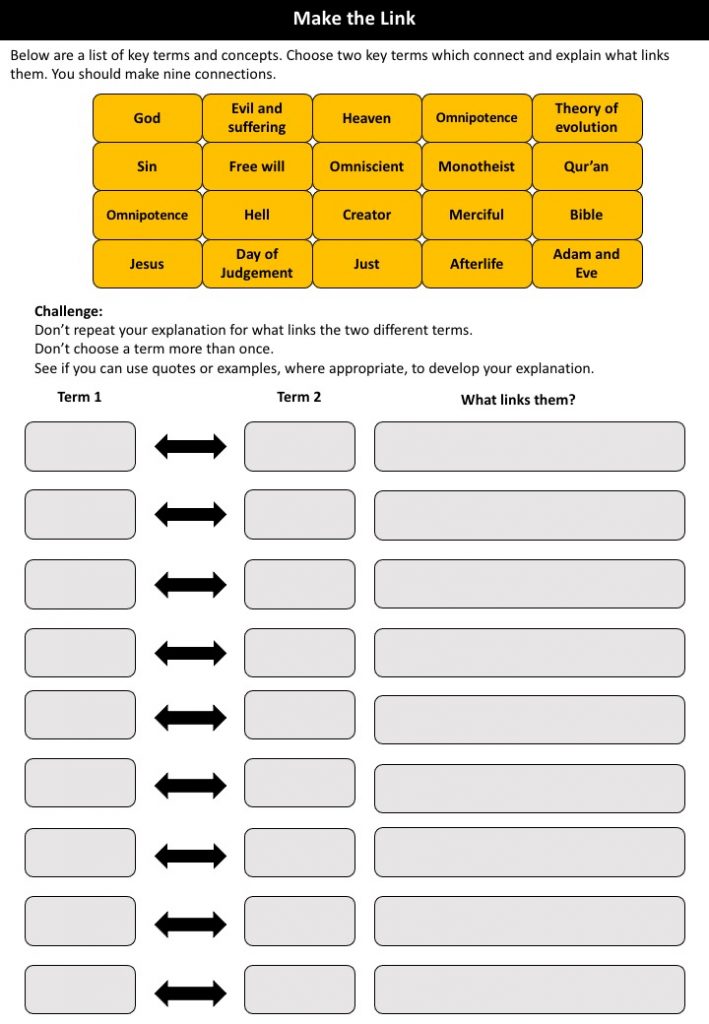 Head of KS3 RE at Coopers Company and Coborn School in East London.

Building An Assessment Model: You Can’t Always Get What You Want

Teaching Students To Talk To Their Texts