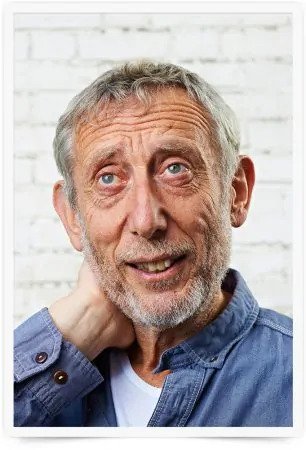 If I were to be asked to name children’s writers who have had a huge impact on me over the years, one of the names at the top of the list would be Michael Rosen. As a trainee teacher I have strong memories of using poetry from his collection Centrally Heated Knickers to introduce new topics in Science.

After my father passed on, I felt really alone in my sense of grief and loss until I found Michael Rosen’s Sad Book (with illustrations by Quentin Blake). More recently, sharing A Great Big Cuddle (his poetry book for pre-schoolers, illustrated by Chris Riddell) with my two-year-old daughter has led not only to some lovely mother-daughter cuddles, but also to her developing a greater vocabulary and enjoying how funny and amazing the English language can be.

So, when HWRK offered me the opportunity to talk with Michael about his writing, the importance of books that make you laugh and the ways that teachers can encourage children to read for pleasure, I was naturally all in. I hope you enjoy this half as much as I did.

The two acts seem so unrelated at first because the way you work in performance is so physical and so very different from academic work. However, it must be connected as it’s me doing it all.

A lot of the motifs, a lot of the ideas, scenes and scenarios from the thrillers we read as adults can be found in these works for younger readers. So, it’s a good reason to look at children’s books as they in actual fact reach right the way forward into the stuff we like as adults.

I got interested in it around 15 or 16, when my dad suddenly decided to do a bit of home schooling and started teaching me English Literature at home. We had an anthology produced by some American critics and I suddenly thought, “blimey… this stuff’s good”. But the seeds must have been sown earlier even though I was ignoring it.

If you think about it this way, there’s not that much distance between Matilda and A Monster Calls. In A Monster Calls, the boy is trapped by this terrible thing of his mother dying. Similarly, Matilda is in a tragic situation; she’s totally trapped at home and in school and then she finds a way out of it.

These books use humour as a way of dealing with serious topics, using techniques such as hyperbole to throw light on these issues but it doesn’t mean that the issue itself and the raising of the questions isn’t just as serious.

It interests me that you can write stuff that deals with emotions that are relevant to that age, but it’s actually readable by the child themselves. When I’m writing these, I try to write them in such a way that draws them through the text, engaging the reader with questions, answers, thought bubbles and little comic bits illustrated by Tony Ross. Yes, I’m quite pleased with that little group of books and even smile when I read them myself.

When it comes to children and digital media I think we have to show them that knowledge and ideas are not restricted to books. It’s a new form of critical literacy that we have to teach. They need to know that if the information comes from The British Library or Wellcome Museum that it can be trusted, but if it’s from someone called Jack who writes at Jack.com then, maybe, it isn’t.

I suddenly realised as it got popular that this was the way to connect up the word on the page with the performance and the modern ways of distributing it. It then all fitted into place. This is a way of communicating these ideas and getting children, young people and adults to see that that performance is part of the way you make the word live. Living word. Living language.

I’m not saying this is the be-all and end-all or it will solve everything, but if you start there, there’s more chance that, whatever text is in front of you, the students have got an angle on it and have some investment in it, some reason why this piece may matter.

The Rise and Rise of Teacher Radio